When’s the right age to get a smartphone?

It’s a hotly debated topic and the one question I get asked the most when I talk to parents and children in schools “When’s the right age to get a smartphone?”

With research by Ofcom in the UK finding that 1% per cent of UK children under five have their own smartphone, rising to 6% under eights, it’s clear that parents are making this decision earlier and earlier. However, the same Ofcom research found that it’s between the ages of eight and 11 when more children are given their own smartphone, with 39% of UK children in this age group owning their own phone. This is mirrored in the US where the average age of a child getting a smartphone is now 10.3 years.

But is this the right age?

A survey by Common Sense Media of 1,240 US parents and their children found 50% of the children in the study admitted that they were addicted to their smartphones. Unsurprisingly, it also found that 66% of parents felt their children used mobile devices too much but perhaps more unexpectedly – 52% of children agreed with them. If children themselves are reporting that they feel they are addicted to their smartphones then perhaps there is a case for delaying the age at which they get them.

There are also legal software limits to think about, most of the apps your child is going to want to use have a age limit of 13 – Snapchat and Instagram in particular. If a younger child is using these on their own smartphone then they have either put in a fake birthdate when their set up their iTunes account, or they have downloaded apps on a parent’s iTunes account – using the parent’s own date of birth. Either way, if you decide the right age to get a smartphone is under 13 you are essentially teaching your child that it’s OK to lie about their age or at the very least wriggle round any age limits, potentially storing up all sorts of problems for the future when much more serious age limits (alcohol, sex) are concerned.

Brain biology may call for a delay

There is also a developing child’s biology to consider. The part of the brain that deals with impulse control, judgement and emotional response – the prefrontal cortex – only finishes developing in the early to mid-20s. You shouldn’t be surprised if younger children with smartphones lack impulse control and get involved with risky behaviour online, perhaps getting themselves into messes that an older child would have a little bit more judgement around.

As a parent you will know whether your child tends towards being mature or immature for his/her age but if you think your child doesn’t have a lot of self-control you should consider the right age to get a smartphone as being when you see examples of self-awareness and self-control developing. Handing over a first smartphone opens the Pandora’s Box of the online world and you want to be sure your child has a fighting chance of being able to deal with anything that comes their way when you are not around.

Parents set the example for their children

Your child is going to watch what you do much more than listen to what you say. In the months and years leading up to handing over their first smartphone, and when they are owners of one themselves, ensure that the behaviours they see in you with your own phone are moderate and balanced. You can’t berate them for spending hours on a screen when you barely look up from your own device when they are around.

The case for a dumbphone

Many parents cite beginning to travel between school and home on their own, or communication difficulties with children living in two different homes as being one of the key drivers in choosing the right age to get a smartphone. In both cases consider getting a dumbphone – a flip phone or a burner/disposable phone – that will enable the child to make calls and send texts without having all the access to the online world that comes with a smartphone. They may not be thrilled but sell it to them as akin to giving it them a bike with stabilisers: explain that it’s the first step to them learning how to use a phone responsibly.

If you decide that travelling between school and home warrants a more sophisticated phone – perhaps a smartphone with a GPS tracker –  then be sure you’re aware of, and know how to configure, all the parental controls that come with both Apple and android devices. These tools are now very sophisticated and detailed and will allow you to customise access by age and type of smartphone activity. There is no excuse not to use them.

Remember that if you hold off giving a smartphone to your child you’re not dooming them to a world without tech or a neo Luddite lifestyle. At school and at home they can still have access to fantastic educational technology tools, software and apps via school and family computers and tablets. The important difference is that access to any of these tools by your child is easily supervised by a teacher or you – when you hand over a smartphone it is then with that child everywhere, including outside of your parental supervision.

So, when is the right age to get a smartphone?

Every family is different and in the end the decision on when is the right age to get a smartphone for your child will come down to your individual circumstances and your parenting approach and style. My personal choice is 13 and this is largely based on the age limits for the most commonly used apps. However, at whatever age you do decide to introduce a smartphone, make sure you sit down and talk through any rules you will set as a family for using it and how to deal with any difficult or uncomfortable situations your child may find themselves in online. And keep talking at every age about your child’s experiences in the digital world. 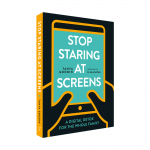 My book Stop Staring at Screens is packed with advice for families on how to talk to every age group about smartphones and screens. Order it here.

← Is It Time To Rethink Smartphones in Schools? Your smartphone addiction is making your children unhappy →